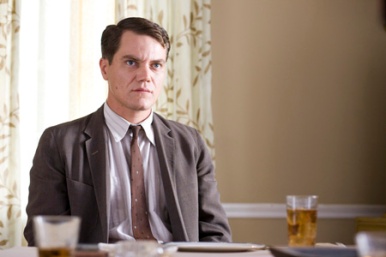 Everyone loves a leading man. From the gentlemanly air of Gregory Peck to the all-American boyishness of Jimmy Stewart, Hollywood thrives on leading men. But what about the other guys, the ones that don’t get the girl or save the day? If anything, they’re more interesting. That’s certainly the case for Michael Shannon, an actor who has made a career out of eccentricity. Ever since he made his cinematic debut in a small role in “Groundhog Day,” he’s played the mentally addled, a white supremacist, an unhinged NYPD officer, and many sinister villains. Working across many genres, he specializes in people operating outside the status quo, who have either given up or been given up on by society. No one in Hollywood today can unsettle you the way he does.

Of course Shannon has also impressed in lead roles, particularly in the critically acclaimed “Take Shelter.” But to celebrate his 40th birthday this week, we felt it was a more fitting tribute to his career to focus on three movies in which he stole the show from a supporting role.

Blink and you’ll miss him, but in his debut feature Michael Shannon already displayed a bit of…flair. As one half of a young couple whose impending marriage is saved by a time-locked Bill Murray on his road to redemption (one of the many adventures of Phil Connors that we hear about only in hints and allusion), Shannon seems much like any anxious newlywed – until Murray presents him and his new wife with a parting honeymoon gift of tickets to Wrestlemania. The ensuing few seconds of mania would much set the precedent for Shannon’s scene-stealing career.

Available on disc from Netflix and Amazon

Sidney Lumet’s pitch-black final film is a maelstrom of shifty deeds and compromised morals, as performed by a relentlessly committed ensemble cast, making it all the more impressive that Shannon still manages, as ever, to stand out. As Dex, the blackmailer seeking restitution for the grisly aftermath of brothers Andy (Hoffman) and Hank (Hawke)’s pitiful robbery gone wrong, Shannon is simultaneously the most threatening and somehow the most principled scoundrel of the bunch. The actor’s trademark combination of humor and insanity provide several of the movie’s few moments of almost-half-levity.

This Oscar-nominated suburban dystopia is known for the lead performances by Kate Winslet and Leonardo DiCaprio, reunited for the first (and to date, only) time since “Titanic.” But Michael Shannon, playing the insane son living down the street, is the foil that keeps it all together. A study in the stifling gender roles and social expectations of 1950s America, “Revolutionary Road” is the story of Frank and April Wheeler (DiCaprio and Winslet), a picture perfect couple whose marriage is in turmoil behind the drawn curtains. In a world of manicured lawns and white picket fences, Shannon’s character is the only one who understands the unhappiness around him, seeing this soulless world more clearly in his insanity than any of the supposedly sane. Shannon, nominated for an Oscar for this role, delivers a pitch perfect performance that shows the audience the true tragedy of the Wheelers’ lives, their hopelessness and helplessness in a world where it’s better to just be crazy.