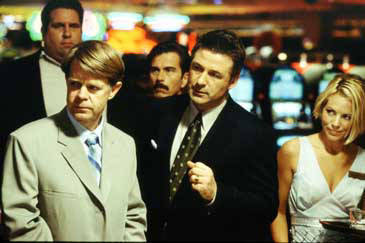 Almost ten years after Robert Rodriguez first took us into the hyper-stylized ultra-violent world of Frank Miller’s “Sin City,” the long-gestating sequel has finally appeared. The comic book/graphic novel writer has seen his work mainstreamed through the popularity of “300,” the influence of The Dark Knight Returns on Christopher Nolan’s Batman trilogy, and, um, the super-hyped fiasco that was his solo directorial debut (“The Spirit”). But for some reason the noir-tinged psychopaths of Basin City still seem to hold a special fascination; though perhaps that’s not so surprising, considering the very real attraction of the original Sin City. Avarice, danger, sex, glitz: you can get it all in Las Vegas (at least in the movies). This week we’re recommending three films from the world’s center for adult entertainment.

Available to rent or purchase on Amazon Instant and iTunes, on disc from Netflix

Mike Figgis’ acclaimed indie was not responsible for the whore-with-a-heart-of-gold, nor the depressed alcoholic; but it’s hard to see these stock roles in any modern film and not see the echoes of Nicolas Cage and Elisabeth Shue. Though it embraces the bleak, self-destructive side of Vegas’ flurry of temptation and obsession, “Leaving Las Vegas” still finds some positive energy amidst the desperation and disappointment. It’s not that either character is beyond redemption, which makes it all the more strangely, tragically pitiful that Cage’s struggling screenwriter obstinately chooses to continue down his path toward implosion; did he go to Vegas to drink himself to death, or did he drink himself to death because he was in Vegas?

Available to purchase on Amazon Instant and iTunes, to rent on disc from Netflix

A twisty neo-noir with a few (slightly gimmicky) flashes of Scorsese-in-“Casino”/dice-fetishist style, “The Cooler” stands out not so much for its story – unlucky Bernie Lootz’s transition from professional jinx to can’t-miss-lover isn’t exactly shocking – but for the exceptional cast, making the most of a traditional setup. Baldwin got the Oscar nod, and deservedly so, for his rough, jaded Vegas old-timer resisting the city’s efforts to scrub away its dirty history; but William H. Macy plays the sad sack titular role with a kind of pathetic, schlubby dignity (Paul Giamatti would be proud), and Maria Bello makes for a pretty believable good luck charm.

Available to rent or purchase on Amazon Instant or iTunes, on disc from Netflix; you can also check out the original streaming on Netflix or Hulu

Forget Transylvania; Las Vegas is the place to be if you’re one of the undead. Everyone stays up all night, there’s plenty of new blood coming into town, and no one stays in town long enough to figure out what you’re up to. That’s what brings Jerry the Vampire (Colin Farrell) to town, moving in next door to high school student Charley (Anton Yelchin) in this remake of a 1985 cult classic. The very fact that our vampire is named Jerry should tell you what kind of movie this is, exuding that special charm of movies aware of their own campiness. Farrell is surprisingly convincing as Jerry, alternately sexy and scary, charming and menacing. To top it all off, David Tennant makes a delightful appearance as Peter Vincent, a sniveling, leather-clad Van Helsing who headlines a Vegas show but is too afraid to actually hunt vampires. Next time you’re packing for Vegas, better bring some garlic.