Thoughts on movies, TV, and other things seen on flat screens

I’ve pretty much always been along for an Edgar Wright ride, even “Scott Pilgrim vs. the World” – and, while “Baby Driver” is better than that oft-maligned flop, it shares and drastically augments my growing concern that Wright has no idea how to cast his leads if Simon Pegg isn’t involved. Michael Cera’s lack of range and off-putting nebbishness tanked “Scott Pilgrim”‘s emotional core, and likewise whatever heights “Baby Driver”reaches are very frequently in spite of, not thanks to, Ansel Elgort’s black hole of charisma. He’s not *bad* exactly, as Baby, the getaway driver with a heart of gold, but he’s utterly boring, and when your narrative is nothing but familiar genre tropes strung together, boring is a cardinal sin.

There’s an exception or two of course: when Elgort gets to show off his training in ballet, as in the way he dances to himself in the car of the film’s opening, outstanding heist sequence, you practically weep wondering what “La La Land” could’ve been with actual dancers leading the way. But mostly Elgort is relegated to playing straight man to a more eclectic (and more fun) cast of supporting characters. Kevin Spacey, Jamie Foxx and Jon Hamm spice up the patter, finding room to play in the too-long gaps between undeniably exquisite chase scenes.

Wright’s been one of the best action directors in the world the past decade, hiding behind the comic facade “Hot Fuzz”, “Scott Pilgrim” and “The World’s End”; “Baby Driver” drops much of the parodic pretense, and it’s exhilarating. The chase scenes are slick, sweet, crowd-pleasing; it’s just too bad Wright’s formal mastery is paired with an utter disinterest in narrative innovation. “Baby Driver” is totally content, for instance, to let Lily James’ character be exactly a genre cliche, practically stepped straight out of a James Cagney flick. I still whole-heartedly believe Wright’s got a masterpiece in him, but gods it won’t be “Baby Driver 2”. 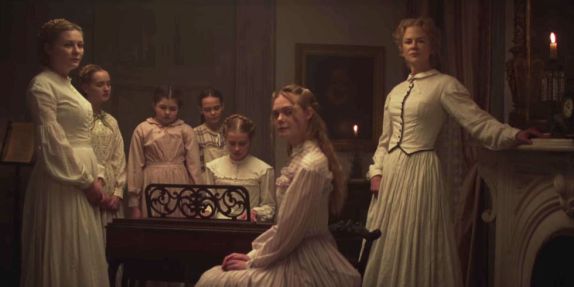 As usual, Sofia Coppola’s latest is utterly ravishing, and its opening shots of a misty, murky, overgrown Virginian estate immediately sets your mind for a moody, complex thriller – that simply never arrives. Coppola’s particular, repeated treatise on repressed white femininity has played out before with more engaging and engaged characters and style (“The Virgin Suicides”, “Lost in Translation” and “Marie Antoinette” are all hardly perfect, but they are bold messes).

Here, she ventures into historic drama and a loaded premise (a house full of Southern women who shelter a wounded, handsome Union soldier) – while apparently uninterested in most any of the implications of setting the story in a specific time, and a specific place. As told by Coppola, you could transplant this story to any war, in any time; and while universality can be a legitimate point to make, in this case the vagueness simply leaves more questions than connections: beyond the lazy explanation of “that’s the source material”, why the Civil War? Why Virginia? Why dismiss the house’s slaves with a literal one-liner of hand-waving dialogue? It is difficult to get engaged with a story that feels like it is only half-heartedly justifying itself. 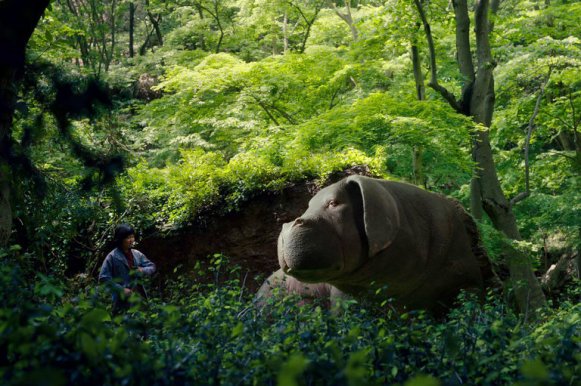 Bong Joon-ho’s ability to pull off a kitchen-sink approach to genre and tone remains unparalleled – it’s difficult to think of any other director who can slip from black comedy to thrilling action to quiet drama and back again so quickly, and so easily.

Like his previous high-profile international effort, “Snowpiercer”, “Okja” features a blatantly off-key performance that threatens to tip his delicately balanced boat over. In “Snowpiercer”, Chris Evans unfortunately never seemed to receive the “satire” memo; here, Jake Gyllenhaal seems to have taken it too close to heart, putting in such an outrageously cartoonish performance that it becomes impossible to focus on what is actually happening in any of his scenes, much less get emotionally invested in them.

But, far more finely calibrated performances from Tilda Swinton, Paul Dano and lead Ahn Seo-Hyun make “Okja” a winning, if not overpowering, modern fable. The heist/chase scene that arrives mid-second-act is one of the best setpieces of Bong’s career, and the early scenes of Ahn and her charming super-pig together in the forest channel Miyazaki in the best way.

War for the Planet of the Apes

The “shock” that we can empathize with digital creations is, at this point, entirely stale – we can’t pretend like Pixar hasn’t been at it for 20 years now. Less examined, and less truly appreciated, is the ability to create utterly seamless blends of CGI and physical realities. I have yet to really be *convinced*, for instance, by literally any Marvel movie, in which weightless blurry robots are destroyed by weightless blurry humanoids, with Chris Hemsworth’s face grafted on to the blur most resembling a human head. Suspension of disbelief means that I can still carry on, and even greatly enjoy, most of these movies. But Hollywood has a problem, and it has to do with weight, and the under-explored (at least, when it comes to the cultural conversation around movies) psychological correspondence between physical and emotional presence.

I’m a newcomer to the new “Apes” trilogy, so yes, I’ll join the party and confirm that “War for the Planet of the Apes” is a shining example of movies that do *not* have this problem. Despite largely taking place in a “real” setting (that is, not Thanos’ asteroid, or a Death Star, or some other completely fantastical green-screen environment), Woody Harrelson’s character is more or less the only human character of note, the entire film otherwise being carried by the apes that seem to be equal parts performance-capture and VFX artistry. Film criticism and discourse has long resisted the true appreciation of collaborative efforts – witness, most everyone’s tendency (including my own) to continue referring to movies by their director as “author”, despite us all objectively recognizing that every movie is a herculean mosaic of group effort – and thus, credit for Caesar the chimp seems destined to be handed disproportionately either to Andy Serkis or Weta Digital, when the truth is likely an un-categorizable middle ground.

Regardless. Caesar’s struggle to consider what a leader can or should be, and the tension between those impulses, is a resonant and affecting creation. The third-act prison-escape drama of “War” threatens to drag out the story too long, but it comes roaring back to a thrilling conclusion thanks to Reeves’ sterling craft and canny eye for set-pieces.

Both HBO stalwarts had solid seasons of comedy, but neither really came close to their respective peaks. The best moments came from those mid- to late-run magic moments of actors and writers who so thoroughly know their characters by now that they’re free to just revel in the wriggly, weird details – see: Zach Woods’ Jared in “Silicon Valley”, revealing ever more hilariously disturbing pieces of his childhood and nearly creating a spinoff show with his schizophrenic side personality, tech bro “Jim Chambers”; or Tony Hale, Matt Walsh and Timothy Simons in “Veep” all somehow finding new depths of empathy and disgust in what, five seasons ago, were already one-note characters (Sam Richardson and Clea DuVall, secret MVPs over the past couple seasons of the show, were generally under-served this time around, but still came through with 101 mph fastballs in limited screentime).

I pair these two together because they’ve also both lost pretty much any narrative engagement to the cyclical nature of sitcoms at this point: the perpetual up-and-down fortunes of Pied Piper and Selina Meyer’s presidential hopes are, at this point, in dire need of a Daenerys Targaryen wheel-breaking. Perhaps, with T.J. Miller’s departure from “Silicon Valley”, that show will at last leave behind Ehrlich’s goddamn living room (or, at least, give us more Jian-Yang). 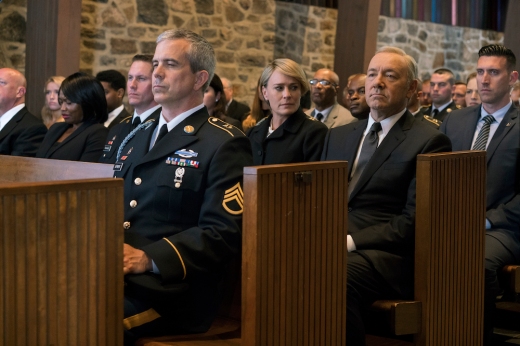 Boy, speaking of wheel-spinning. Does this show have an endgame? A point to make that it didn’t make in season two? Any reason for existing at all? I mean, the ending of season five puts us back in literally the exact same place that season three ended, with the promise of Underwood vs. Underwood. Last time turned out to be a roughly two-episode-long feint; why should I believe the political thriller that cried wolf? Especially when there’s barely even fun to be had in the supporting cast anymore? (Does Lars Mikkelsen even know he’s still on this show???) The only glimmer of life here is Patricia Clarkson more or less playing Tammy One Goes to Washington.

Where “House of Cards” has grown utterly stale despite self-serious insistence that it’s “relevant”, “GLOW” feels fresh by embracing familiar, comfortable formula done well. We are in true boom times for half-hour comedy, but even so “GLOW” stands out for its snappy and savvy writing and top-to-bottom charming cast of established (Alison Brie, Marc Maron) and should-be (Sunita Mani, Sydelle Noel, Britney Young) stars. It won’t inspire as many thinkpieces as many other peak-TV offerings because it’s message, and implications, are straightforward and not terribly ambitious, but that’s most increasingly welcome in a bloated landscape of cultural conversation.

Ethan currently lives in Connecticut and works in digital and audiovisual preservation. Detailed thoughts on 1930s Soviet cinema available upon request. View all posts by Ethan