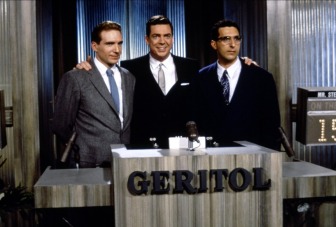 It’s a popular notion that truth is stranger than fiction. When it comes to film, sometimes you don’t have to choose. Take This Week in Richard Linklater: we’ve already been talking enough about him lately for his increasingly ambitious work, but a few days ago we learned that what was already one of the more peculiar projects of his career, “Bernie” (2011), just took an even more fascinating turn.

So maybe not every case of a film “based on a true story” winds up with a released murderer living in a Hollywood director’s garage. But there’s a reason filmmakers keep going back to that particular well. So for this week’s lineup, we’re offering up three selections where the backstory is just as (if not more) intriguing than the film it inspired.

Available to rent streaming from Amazon Instant, iTunes, or on disc from Netflix

There’s a fine line between re-enactment and re-creation; at what point do you stop pretending to act out someone’s life and start reliving it? If there’s something particularly eerie and off-putting about Richard Brooks’ adaptation of Truman Capote’s watershed real-crime narrative, it’s not an accident: the director purposefully chose to film in as many of the actual locations involved in the case as possible. That includes not only the actual cells in the Kansas State Penitentiary where Perry Smith and Dick Hickcock were imprisoned and executed, but the actual house in which the two petty thieves murdered all four members of the Clutter family. The flashback scenes to the crime are amongst the most haunting in cinema, with Robert Blake and Scott Wilson drifting through blackened hallways like men possessed.

Of course, Brooks’ film barely even touches on one of the most eccentric pieces of the case, namely the peculiar relationship and camaraderie struck up between the criminals and Capote while he was researching the book. For that part of the story, you can go to Bennett Miller’s 2005 film “Capote,” and learn how Harper Lee and To Kill a Mockingbird somehow got mixed up in all of this.

Available to rent streaming from Amazon Instant, iTunes, or on disc from Netflix

“I wanted to show the world how deep starvation is in Cambodia, how many people die under Communist regime. My heart is satisfied. I have done something perfect.”

In “The Killing Fields”, Haing S. Ngor plays Dith Pran, a Cambodian translator and journalist for New York Times reporter Sydney Schanberg (Sam Waterston) during the Khmer Rouge’s brutal takeover of the country. The movie follows Dith Pran as he gives up the chance to escape in order to help Schanberg, but is subsequently trapped in the totalitarian regime that murdered up to 2.5 million people and destroyed a nation.

A doctor by trade, Ngor had never acted before, but drew on his four years under Pol Pot’s horrific regime to deliver an unforgettable performance. His face remains blank for much of the film, but his eyes carry the grief of a man and a country destroyed by utter madness. He won an Oscar for his performance, becoming only the second non-professional actor to do so. “After all, I spent four years in the Khmer Rouge school of acting,” he said after collecting the golden statuette.

“The Killing Fields” is one of the most powerful and authentic portrayals of the violence, cruelty, and senselessness of communist regimes, capturing not only the bloodshed but also the psychological and societal toll of an ideology that believed that all education, culture, and tradition must be destroyed. The film’s haunting images stay with you long after the credits roll, from the muddy expanse of corpses to a child crossing out his parents on a chalkboard. It’s a difficult film to watch, but according to Ngor, it is still “not strong enough, not bad enough, not cruel enough, not violent enough.” That alone should be reason enough to watch it.

Available to rent streaming Amazon Instant, iTunes, and on disc from Netflix…you know, the usual

Imagine that Ken Jennings, the all-time Jeopardy champion who won 74 games in a row, had actually been fed the answers before the show. That is the premise of “Quiz Show,” a movie that chronicles the real quiz show scandals of the 1950s, when America learned that it had been duped by television executives eager for high ratings and contestants unable to resist 15 minutes of fame.

The movie was based on a memoir by Dick Goodwin, the young lawyer whose dogged investigation lifted the lid on the corruption. However, Goodwin, a consultant and producer for the movie, did not consider the quiz show scandal to be his proudest accomplishment—and who could blame him? The accomplished lawyer was a speechwriter and advisor for Presidents Kennedy and Johnson, and was the pen and mind behind LBJ’s landmark speeches on the Great Society and the Civil Rights Act.

With fantastic performances from Ralph Fiennes and John Turturro in particular—and a hilariously sinister cameo from Martin Scorsese—“Quiz Show” is a masterful cat-and-mouse game that transforms into a case study of morality that asks deeper questions about corruption, complicity, and guilt. Because really, with fame and fortune at your feet, what would you have done?