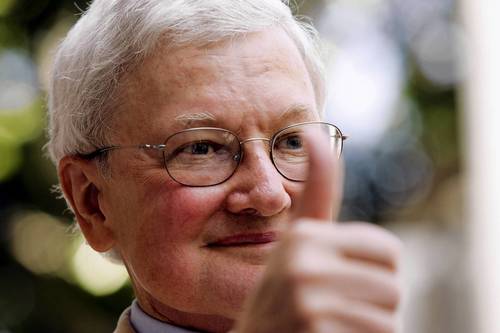 During the time I’ve been writing this blog, there have been any number of filmmakers I admired that passed away. Directors, actors, documentarians, etc. When that happens, I try to pay my lowly tribute – a few paragraphs on a little-read WordPress site might not be much, but it’s what I have to offer. They have my respect and affection, and it seems only right to express as much.

But today’s loss has hit a little harder. Respect and affection is one thing; admiration and adoration is another. Today I have to walk around with a pit in my stomach because of that terrible, unfair feeling that some little piece of my life is gone. I never met the man, never so much as exchanged an e-mail. He never even responded to any of my comments on his blog. But the honest, brutal truth is that I have relatives and so-called friends that have had less presence in my life than Roger Ebert. I don’t know if I ever would’ve had the courage to tell him that, but I admit that I’m upset (to a point that I wouldn’t even have expected) that I will never even have the chance to do so.

Film critics, especially those still tied to print media, can insinuate themselves through regularity. There are a lot of classic film writers that I have made an effort to familiarize myself with: Kael, Farber, Sarris, etc. But their work existed entirely in the past for me. Their writings are accepted canon, and I could go through them at my own pace. I would absolutely classify Ebert in that same group now, but it was more of a creeping, personal discovery than an instant induction. I was not told by anyone that Roger Ebert was brilliant. I was not assigned his essays or books for class. Obviously he was famous, and so I went to his site to see what he had to say – and I just kept going back, week after week, month after month, year after year. Reading reviews for new releases. Reading about new additions to his Great Movies series. Reading his blog posts on everything from politics to video games to New Yorker cartoons. And somewhere along the line I realized that I wasn’t just reading because, as a self-professed film snob, that’s what I was “supposed” to do. I was reading for the joy of his wit. For the energy and enthusiasm behind every word. For his unique, utterly idiosyncratic perception.

The more I learned about him, the more I admired him. His stumbling entrance into film criticism (at the astounding age of 24), completely lacking in any kind of formal training in filmmaking or cinematic history, suggested the lengths that a pure, unbridled love for the movies can take you. His revolutionary TV program with Gene Siskel proved that it was possible for critical debate to be lively, intelligent, entertaining AND popular – all at once. And his latter-day struggles with cancer showed everyone that he was not just an excellent critic, but an impossibly optimistic, resilient human being.

In fact, he stayed so staggeringly productive these last few years, it became even harder for me to imagine a day when he might not be with us anymore. Just last year, in 2012, he reviewed over 300 films – a record mark for his entire career. It was yesterday – yesterday – that, in announcing a “leave of presence,”  he assured his readers that while a resurgence of cancer in his hip would prevent him from watching and reviewing as many films as usual, he would still be blogging actively, helping to organize his annual film festival “Ebertfest,” participating in a Kickstarter campaign to revive “At the Movies,” and contributing to an upcoming documentary (produced by Steve James, Steven Zaillian and Martin Scorsese) about his own life. It seemed safe to assume that I would still have plenty of chances to hear the man’s always-eloquent opinions and musings. But just like that, we’ve been robbed of a vital, impassioned voice.

I am angry, and hurt, and horribly disappointed. Because to me, Ebert wasn’t just the go-to film critic, a guy who gave the “thumbs up.” He was a role model. It wasn’t that he had my perfect, dream job, or even that he excelled at it – it was that he had the gratitude and humility to love every damn minute of it. If I ever manage to turn my hobby for writing and my love for film into a profession, I only hope that I can be as appreciative of my great luck as he was.

And I am thankful for one thing: because of all he left behind, that leave of presence can last forever. I can always keep his words on my shelf. I may not be able to make my weekly trips to his website to read what he thought of the latest releases, but anytime I catch up with an older film I can probably go find his thoughts about it. Thanks to his manic productivity, I’ll still be discovering new reviews and new essays for years to come. In that way, he never has to die for me.

So thank you, Roger. Thank you for sharing your gift with us, so generously and so often. The New York Times reports that heaven, for you, would be “Citizen Kane” on a permanent loop and an endless supply of vanilla Haägen-Dazs ice cream. Wherever you are, I really really hope that’s what you’re getting.

One thought on “Roger and Me”