There were a number of problems with 2008’s “Indiana Jones and the Kingdom of the Crystal Skull,” but aside from the aliens and Shia LaBeouf and the aliens and the surviving a nuke in a fridge and the aliens, one thing that bothered me was that Indiana Jones had gotten, well, old. Sure, Harrison Ford performed admirably despite the significant amount of time between installments, but there was still something off about seeing a graying Indy. We don’t want our heroes to age – they are supposed to be something more than human, immortal guardians that we can always count on to save the day.

Tintin, the eternally boyish protagonist of the classic comic series by Belgian artist Hergé, certainly delivers in that respect. And by envisioning the long-awaited film adaptation of Tintin’s adventures using motion-capture animation rather than live actors, director Steven Spielberg has ensured that on the big screen, Tintin will remain eager, enthusiastic, rosy-cheeked and carefully coiffed for all time. The first in a three-film ultra-nerd collaboration – Peter Jackson served as a producer on this film and will direct the sequel, and the fanboy conglomerate of Edgar Wright (“Hot Fuzz,” “Shaun of the Dead,” “Scott Pilgrim”), Joe Cornish (“Attack the Block”) and Steven Moffat (of “Doctor Who” and “Sherlock”) drew screenwriting duties – “The Adventures of Tintin” is a relentlessly energetic adaptation that does justice to Hergé’s lively adventures.

Spielberg’s childhood love of Saturday serials and boy’s adventure tales has already been much-discussed in terms of the Indiana Jones franchise, and it is that state of arrested development that made the Bearded One the obvious choice to bring Tintin to the screen. While there are no Nazis in the vague historical setting of Hergé’s comics, there are plenty of breakneck chases, hidden treasures, and exotic backdrops, from Tibet to South America and Arabia. Put a little stubble on Tintin’s perpetually pre-pubescent chin, give him a whip, and it wouldn’t be too hard to imagine him scouring the deserts of Egypt for the Ark of the Covenant. Indeed, making a Tintin film has apparently been one of Spielberg’s dreams for decades, and he was even given Hergé’s personal blessing to do so before the author’s death in 1983. Yes, that’s how long Spielberg has been thinking about this movie.

And it is to the man’s credit that he felt the need to wait until the technology was right to do things properly. Along with its fellow in animated spectacle (and nostalgia) “Rango,” “The Adventures of Tintin” has provided us with another superb example of how ridiculously realistic computer-generated images have become: there are moments when you can literally count the hairs on the back of a man’s hand. But there has also been an attempt to stay true to Hergé’s simple, clean-line drawing style by exaggerating the features (particularly the sizable schnozzes) of many characters. This blend of photo-realism with cartoonish caricaturing proves remarkably easy to get used to, and provides the film’s more fantastical moments with an exhilarating sense of presence. The motion-capture, meanwhile is not nearly as distracting here as it has been in other animated films; the dead eyes of Robert Zemeckis’ “Polar Express” are thankfully absent. Indeed, this may be the most subtle employment of motion-capture yet – one would have to study Tintin’s face very carefully to find Jamie Bell’s familiar visage. It seems like using motion-capture to create more authentic facial tics and mouth movement may be a more successful route than slavish dependency to the actor’s features (though that will certainly do nothing to quell the whole “should motion-capture performances be judged alongside live-action” debate).

To top things off, animation gives Spielberg the freedom to create shots that he previously could’ve only dreamed of: in one scene Tintin stumbles into a busy city street, and the way the camera swoops and swirls around our hero gives the moment a sense of immediate, frenzied danger.

I should probably mention the plot of the film at some point, although it seems fairly irrelevant to a film whose main goal is purely cinematic thrill. Tintin, an ambiguously young theoretical reporter, purchases a rare model ship at an outdoor market, inadvertently drawing the ire of a menacing millionaire by the “sugary” name of Sakharine (Daniel Craig). Smelling a story, Tintin and his ever-loyal terrier Snowy investigate the ship’s history, and discover themselves suddenly at the center of a search for a lost treasure with a violent history (I certainly hope Tintin’s newspaper has good insurance). There are kidnappings, shootouts and daring escapes as Tintin briskly dashes from one set-piece to the next. It’s not for nothing that the iconic image of Hergé’s hero is that wonderful frame (referenced, among many other allusions to the original comics, in the film’s delightful opening credit sequence) of Tintin and Snowy silhouetted against a black backdrop, dashing forward to their next adventure. 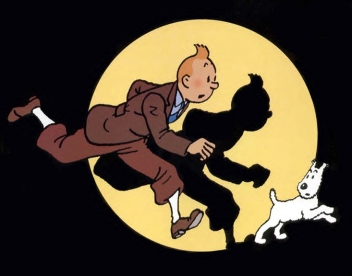 Tintin himself is a winsome hero, though too chase to be truly compelling himself. The comics are far more interesting for their wide cast of colorful supporting characters, and the film is the same, with the blundering drunkard Captain Haddock (motion-capture king Andy Serkis) and the comic relief duo of inept Interpol agents Thompson and Thomson (Nick Frost and Simon Pegg; or is it Simon Pegg and Nick Frost?) easily stealing the show. Serkis in particular is enthralling as Haddock (who will become Tintin’s regular sidekick), equally at home whether soused, swashbuckling or sagacious.

Whether showing up the “Pirates of the Caribbean” franchise with a breathtaking battle at sea or rushing through Moroccan streets like Jason Bourne-lite, “The Adventures of Tintin” is plain, ridiculous fun. At times Spielberg and his writers seem to be trying just a little too hard to keep the audience entertained, inserting bits of juvenile humor that aren’t really in keeping with the spirit of the books and feel like they’re from a far less European story. Spielberg also gets a little carried away by the Indiana Jones parallels, as Hergé’s marginal preference for witty dialogue over action and gunplay has been tipped the other direction. But the film never completely falls flat, and in the few moments where it trips up a bit, the momentum keeps you inevitably scampering on to the next scene.

Still playing in theaters (avoid 3-D if at all possible).