For many cinephiles, this particular stretch of filmmaking probably represents Allen’s creative zenith. After his lighter comedies of the early 70’s, the former stand-up artist established himself as a director of substance with “Annie Hall,” a smash success that came a Best Actor award shy of sweeping the Oscars (Woody could still comfort himself with the Screenplay and Director statuettes, of course).

Really, there isn’t so much to talk about for “Annie Hall” and “Manhattan”; if the purpose of this feature is to dispute or confirm Allen’s genius, I’m not really going to get anywhere with two films that are simply undeniable classics. Considering Allen’s neurotic persona, the films in which he stars are a balancing act between infuriating nebbish-ness and sympathetic existentialism; in other words, we can all identify with Woody’s quest for love and purpose, but does he always have to be so annoying about it? “Annie Hall” remains the gold standard in this regard – the regret and melancholy of a love story told in flashback frees up the audience from the conventional lather-rinse-repeat structure of most romantic comedies.

As does the startling Spring-Autumn pairing of Mariel Hemingway and Allen in “Manhattan.” That is perhaps the greatest credit to Woody’s career: that, unlike so many Hollywood formula films, he has not forgotten the implications of the “romance” half of romantic comedies. So many installments in the genre shoehorn in the romance, guiding relationships according to plot convention rather than the natural progression of character. It is, after all, far more important that we get an amusing scene involving the couple in question attempting to drive a golf cart. Allen remembers that romance is a process, and one that almost never passes cleanly from point A to point B. Romance includes heartbreak, temptation, tribulation and effort. Often we can’t appreciate it until it’s gone, as with Isaac, the protagonist of “Manhattan.” This seems a pessimistic attitude, but Allen balances the difficult side of love with scenes of such touching joy, comedy and beauty (think the lobster scene of “Annie Hall”), you realize that Allen’s intent is really to celebrate love as it is, warts and all. The ending monologue of “Annie Hall” remains probably the most concise statement of Woody’s romantic philosophy: we put up with the insanity and frustration of love because, in the end, we all need the eggs.

But when romance becomes more of a subplot to Allen’s other thematic concerns, that’s when we start to run into trouble. “Stardust Memories,” for instance, has the potential for similarly striking insight into failed relationships; after all, the film is a blatant tribute to Federico Fellini’s “8 1/2,” itself a woozy but searing self-indictment of creative and personal stagnation. But rather than make a Woody Allen film with tinges of Fellini surrealism, Allen simply re-made “8 1/2” while substituting the perpetually cool-but-conflicted Marcello Marstroianni with his own anxious protagonist. What we get is a marginally funnier but disjointed parody of “8 1/2,” which is to say an inferior “8 1/2.” It’s a shame, especially since the always-wonderful Charlotte Rampling is on hand to deliver a performance on a completely different level than Allen’s quirky mugging.

By the time I got to “Zelig,” I concede that I was already growing downright uncomfortable with Allen the leading man, to the point that I began unconsciously scratching myself every time he appeared on screen. In “Annie Hall” and “Manhattan,” his fast-talking, insecure personality was tolerable, mainly because it still felt like an extension of his stand-up persona: the entire thing felt enough like a put-on to be laughable and sympathetic. By the time you get through “Stardust Memories,” one begins to wonder if there is any distance whatsoever between Woody the writer/director and Woody the character (no matter how much Allen insists that “Stardust” is not autobiographical). The documentary-esque footage of “Zelig” is a brilliant conceit that allows Allen to quickly and amusingly establish the physical abilities of “human chameleon” Leonard Zelig, but even this radical shift in genre style can’t hide Allen’s trademark persona forever. As much as we are assured that Zelig’s behavior can change just as easily as his outward appearance, whenever we hear Zelig actually speak, the mannerisms and topics of discussion are undeniably still that of every other Allen-portrayed protagonist ever. “Zelig” has an ebb and flow to the narrative that was missing from “Stardust Memories,” but I couldn’t help but think the film would’ve worked better as a short rather than a feature, limiting Zelig to a concept rather than  full character, because given time every Allen protagonist simply merges into the same stuttering being. 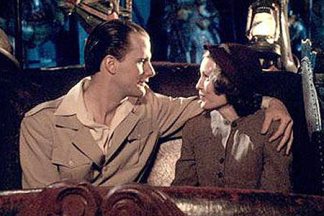 Perhaps it was because I was so desperate to get away from that same character that “The Purple Rose of Cairo” felt quite so refreshing. But even removed from the context of Allen’s greater oeuvre, “Purple Rose” is an absolutely charming piece of nostalgic romanticism, and one of the most strangely profound examinations of the escapist quality of cinema. Allen’s usual neuroses are nowhere in sight; the thematic conflict hinges instead on Mia Farrow’s character, who simply wishes that the glamorous world she sees in films was real. And who hasn’t had the same desire at one point or another?

There’s also a level of self-consciousness here not present in many of Allen’s other films: at the same time that Farrow idealizes what she sees on the screen, Allen idealizes what WE see on screen, populating 1930’s Depression-era America with charming actors like Farrow and Jeff Daniels, and filming the whole thing with a golden-tinged lens. This reflexive quality makes the film all the more engrossing and, ultimately, poignant; there’s a recognition of the danger of nostalgia and escapism not present in any Allen film I’ve seen except “Midnight in Paris.”

So we’ve got a few trends here to look for as I delve deeper into Allen’s work; the question is, can I withstand another batch without breaking into a rash?

Next time: “Hannah and Her Sisters,” “Manhattan Murder Mystery,” “Crimes and Misdemeanors,” “Shadows and Fog,” “Alice”